View all posts by mvcsstudent32:

Ukulele version of “The Fox Went Out on a Chilly Night” 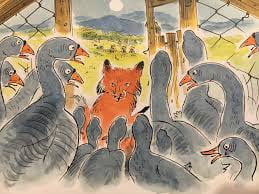 In 1995 biologists decided to do something about the lack of wolves in Yellowstone National Park. To introduce the Gray Wolves back into Yellowstone, Doug Smith, Yellowstone’s wolf biologist, had to transport wolves from all over Canada. The wolves in all of the new packs didn’t know each other because one could have been taken from the British Columbia and another from Alberta. The packs were organized with one dominant male, one dominant female, and several subordinate younger wolves. The packs were completely new. One hundred four wolves split into 11 packs were transported to Yellowstone and placed into one acre acclimation pens per pack. The new alfa wolves mated and had babies. All but one of the packs bonded well. When the one pack was released, the males went one way and the females went another way. These wolves either died, or they found a way to join another pack.

The Rangers released the wolves using the soft release method. The soft release method involves great commitment and effort. You must continually feed them at the exact place the animals were released. This soft method, while time consuming, helped the packs acclimate.

While the wolves were in their acclamation pens, they were fed roadkill and other dead meat. This is called back-up feeding. They were fed once a week or less. The longest time interval between feeding times was 14 days without any sick conditions. A pack of six wolves will eat about 800 pounds of food per month. This weight would be equivalent to about two elk and a small deer. When the wolves did make a kill, each wolf would eat about 30 pounds of meat.

There was a huge environmental change with the reintroduction of wolves. Before the reintroduction, there was only one colony of beavers in Yellowstone. Now there are at least nine. Because of the lack of predators, the elk had been heavily eating the willow. This made a huge impact on the beavers because they need willow to survive the winter. When the wolves started hunting the elk again, they could no longer stay in one place to heavily eat the willow. Instead, they were constantly moving. Because of this, the beaver population rose. More beavers were living through the winter.

The scavengers were impacted by the reintroduction of wolves too. Since there were wolves now, there was more carrion in the winter and spring. This benefits magpies, ravens, eagles, coyotes, and bears (both black and grizzly). It especially affected the bears coming out of hibernation. It positively impacted a lot of animals.

Even though the wolves were taken from their Canadian habitats and brought to Yellowstone National Park, with some help, they thrived again. They helped a lot of animals, and the ecosystem. Without wolves the elk would have overrun the park, and the beavers would have disappeared from it. Wolves are a crucial part of the ecosystem.